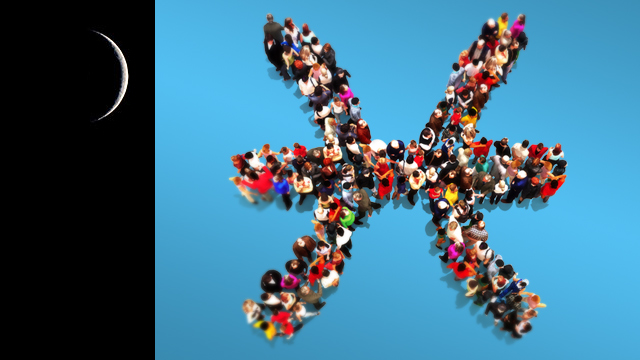 This week, the new lunar month of Pisces starts! Let’s take a closer look at the very watery atmosphere we can expect to enter! At the birth of the new moon we witness nine planets and aspects in water (mainly, Pisces)! Prepare yourself for Atlantis, or a good scuba diving course! There is no way we can hide our emotions, nor deny them this month. To the contrary, this is our opportunity to connect with another part of ourselves: our imagination, our deepest intentions, but also our deepest fears!

Since Pisces is the last sign of the zodiac, it represents the spine of all the months. Its motto is, “I believe.” This whole month is an opportunity to refine our belief systems, and to remove all our hidden negative agendas, which we know only stem from fear. Let’s stand for our beliefs!

We are also blessed with three strong Aries planets (Venus, Mars, and Uranus) to turn creativity into a great business opportunity. This is a month to reveal the concealed and dare to move forward! Legally, we must make sure all contracts are rock solid, to avoid any Neptunian illusions.

Now, as accustomed, we will give our lovely Piscean friends a little roast!

The symbol says it all: two fish swimming in opposite directions. Indeed, that sounds like controversy—the best and the worst in every human being, all at the same time!

There is no question, they are the sweetest, most inspired, supportive, charming, and loving people we’ve ever met (ruled by beautiful Jupiter). And yet, sometimes they can go to victim.com, and simply disappear from the face of the earth (they are also co-ruled by elusive Neptune).

They have a dreamy look about them, and usually have big, round eyes that convey so much compassion, it makes us melt. But this can also make us so angry sometimes! Making a Pisces move forward is like trying to push the ocean to one side of the planet; it just won’t work!

Very wise and extremely intelligent people, they represent the air of the water signs, hence their strong intellect. Many Pisceans, in fact, have a superior I.Q., but can be quite clueless when it comes to daily life! Einstein, the Piscean, was a genius but was, as the story goes, a bit estranged from this world and better connected to his own galaxy! Pisces is indeed the sign of creativity and invention, as demonstrated by Dr. Seuss, the children’s book author—also a Pisces!

One of the most difficult things for this sign is to commit body and soul to life, first because they forget their own commitments, but also because the sign is double and contradicts itself, like Dr. Jekyll and Mr. Hyde! Mr. Hyde will reveal itself in secret addictions, or strong pulls to negativity. Though, that side is likely to never be revealed.

According to tradition, the sign of Christianity is Pisces. The birth of Jesus marked the beginning of the age of Pisces, giving way to love, kindness, and charitable acts. In the kabbalistic tradition, it is believed that Jesus was also a Pisces.

Great businessmen, Pisceans also make fantastic spies, as they can swim in many waters. Some choose politics to try to effect change in the world. Pisceans tend to have a strange relationship with money, so oftentimes money won’t stick to them. They can also be very irresponsible with it. Though, some choose to become great philanthropists and share it.

Here is our plan of attack for this month:

This month, beware of sensitive piscean body areas: the feet and spine.

Have a wonderful month!