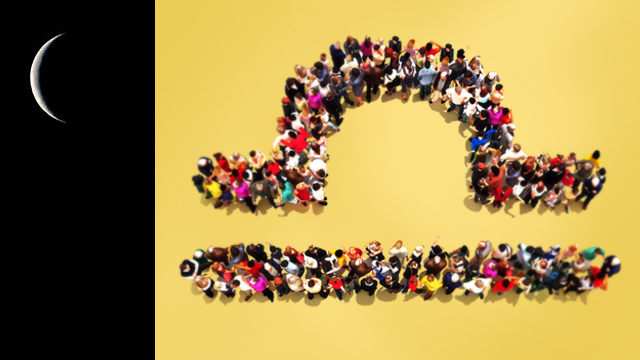 Hi, everyone! This week gives us a direct infusion of energy straight from the cosmos! The end of the week coincides with the New Moon of Scorpio, the most powerful day of the year. So, let’s get ready for the rocky month ahead!

This week, we are blessed with a chart filled with four Libra planets, a fiery Leo moon, and a rising in balanced Taurus. Venus just entered peaceful Libra, while Jupiter has already progressed in the sign of the month (Scorpio). The combo of Libra and Scorpio is excellent for more balanced decision-making. In addition, due to Jupiter’s position in the chart, we’ll have more clarity for the important things in life, like work, friends, and of course, a higher purpose. Much of the fog and haze that has been present for months is now dissipating.

The Scorpio lens is sharp and decisive, and it will carry us throughout this entire year. It may rock our Taurus comfort zone a bit, but it’s a great relief to know who our real friends are, and if, indeed, we are in the right job! It’s a definite upgrade to regain control of many areas in our lives.

Our first impression of the cosmic chart is that it’s definitely the most balanced and harmonious we’ve seen in a long while, especially on a personal level. However, when we dig down a bit more, we realize that Chiron, Mars, and Saturn are involved in a T-square. In ancient astrology, Mars and Saturn are called the malefic ones. With Chiron included in the mix, we get a sickening feeling that something is brewing in the world.

We know that Scorpio has a violent element associated with it, and the proof is in the pudding; just as Jupiter entered the sign, the shooting in Vegas occurred. This isn’t to say things will continue in the same line, however, we have a greater responsibility to orientate our consciousness towards all world leaders, and project the idea of choosing peace over war. This starts with our world, our immediate environment, and will hopefully grow to reach a much greater number of people.

One of the most proactive actions we can undertake right now is to send positive energy and prayers toward the most volatile places in the world. The goal is to cancel negative decrees and conflicts. Our beloved teacher, Rav Berg, taught us that mankind has the power to control everything. We humans have a responsibility toward all the other kingdoms: animal, vegetable, mineral—even the kingdom of angels!

It is said the first man, Adam, was created with atoms from all the different kingdoms, so he would have a deeper affinity and greater compassion for each of them, feeling they are a part of him. This is the perfect week to reflect on that, and lend a hand to better our environment. It's about time we make the cosmos feel we are giving it the respect it deserves! It is our spiritual job to supply positive energy to the rest of the universe.

Let’s not forget the amazing gift the cosmos will send us at the end of this wee: the New Moon of Scorpio, which is considered THE most powerful day of the year! In the meantime, as we get more clarity in our lives, let’s work on affecting global change. The “butterfly effect” works; let’s use it! So, make every effort to volunteer this week, to give of yourself more proactively, and reconnect with your true power!

Next week, we will talk about the New Moon of Scorpio!