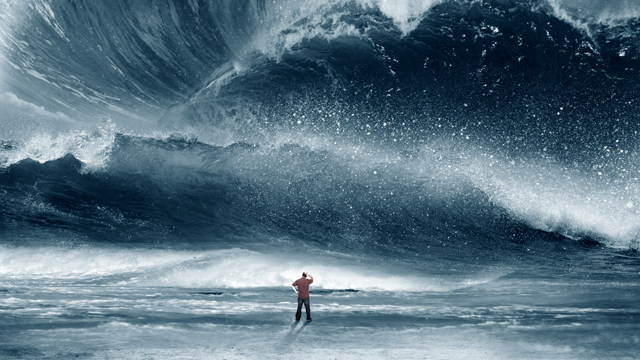 As we study the wisdom of Kabbalah, we learn that any disconnection from the Light of the Creator produces darkness, a darkness that brings about chaos and destruction. We think mainly of negative actions when we ask ourselves what causes a separation from the Light, though we often forget that there is another problematic cause: complacency.

The Zohar says, in the portion Beha'alotcha (paragraph 88), that, "The Zohar is the Ark of Noah, to which are gathered two from a city, seven from a kingdom and, occasionally, one from a city and two from a family..."

The Midrash (an oral companion to the Torah) says that when Noah came out of the Ark and saw the entire world had perished, he screamed at the Creator, "How could you do that?" And the Creator answered, "Now you remember to ask? Why didn't you wake up before it was too late?"

As students of Kabbalah, we must constantly ask ourselves if we are doing all that we can do to reveal Light and counter chaos in this world. When we are complacent, we allow darkness to spread through ourselves and the world. When we finally awaken to the negativity we have caused and been blind to, we realize that all of the pain and suffering that took place did not have to happen. If we are true to our spiritual path, we will awaken to and identify negativity before it manifests.

Rav Avraham Azulai, the great kabbalist of the 16th century, says in his book Chesed Le'Avraham (Spring 1, River 24): "Whoever is going to have the merit to be connected to the Zohar is going to experience the end of pain and suffering, because that little work (scanning and spreading the Zohar) in our time is more important than all of the abundance of blessings that was brought to the world until now."

The study and dissemination of the Zohar is, according to the kabbalists, the most important and effective way to cancel negativity and reveal Light in the world. Each Zohar contains a powerful energy that is unlocked as it is scanned, read and studied – an energy that is beneficial to all people, whether they study Kabbalah or not.

We need to learn from the story of Noah and understand our power. As owners of the Zohar, we need to feel the urgency to bring everybody we want to save from the flood of chaos to the Ark – the Zohar. We must battle our complacency every day, knowing that in doing so, we are countering darkness and revealing Light. By scanning, studying and spreading the Zohar, we have the power to end pain and suffering in the entire world in a merciful way.