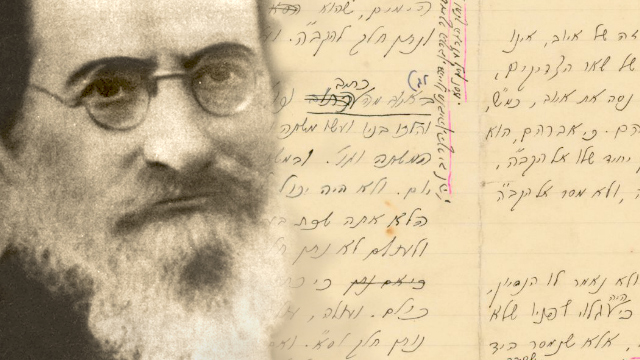 Rav Ashlag was the one man who truly understood - and helped advance - the transformations of the 20th Century.

Rav Ashlag broke with the 4,000-year-old tradition that had locked Kabbalah's great power inside the mystifying writings of the Ari. The time had come to act. The ancient vaults to Kabbalah were to be opened by the hands of this renowned sage.

Rav Ashlag explained that the Zohar foresaw the physicality of today's material world and its rule over the spiritual reality. During these times, men motivated by self-interest, intellectualism, and ego avoid spiritual wisdom like the plague. Only those who seek truth with a pure heart are able to find this wisdom. These views are expressed in his kabbalistic treatise Entrance to the Tree of Life.

In such a generation as ours there is nothing to be feared from disclosing the true wisdom openly.
- Entrance to the Tree of Life, Rav Yehuda Ashlag

The year was 1922. Rav Ashlag established the very first Kabbalah Centre in the city of Jerusalem. Learning was made available to those who were steeped in religious studies, and were over the age of 40.

Many leading rabbis of his generation applauded this historic opening. Others vehemently opposed it, fanning the flames of controversy that surrounded the dissemination of this spiritual wisdom. Rav Ashlag was even beaten outside of his synagogue. He was left lying in his own blood, on the steps of his temple, merely for offering wisdom to his fellow man.

Rav Ashlag delved into Lurianic Kabbalah with devout fervor, unraveling some of the greatest secrets that mankind has ever known. But the vast majority of the world paid little attention to his historic action, nor could they perceive its influence.

His writings tackle topics that pertain to the ultimate removal of chaos - the chaos that has ravaged humankind since time immemorial, with concepts such as relativity, space travel, healing, and other matters affecting the welfare of humankind that were first concealed in the Zohar some 2000 years ago.

Rav Ashlag's genius lay in his ability to extrapolate these secrets from the Ari's 500-year-old writings. As the mysteries were unveiled, they were injected into the collective unconscious of the people, including his counterparts toiling in the world of physics. Once again, the "monolith effect" was at work. On the unseen spiritual level, his work ignited the technological explosion of the 20th century.

“Redemption depends on the learning of Kabbalah. If people neglect the study of spirituality, then poverty, war, desolation, murder, and destruction will come to the world.”

Rav Ashlag departed our physical world in 1955 on the holiday of Yom Kippur, leaving the legacy of the first-ever Hebrew translation of the Zohar from its original Aramaic. This monumental tome includes a profound and lucid commentary disclosing the long-hidden secrets of the Zohar and their relevance to our lives. His other notable legacy is his beloved student, kabbalist Rav Yehuda Brandwein, who succeeded Rav Ashlag as the spiritual leader of the Kabbalah Centre.

CLICK HERE to learn more about the history of Kabbalah