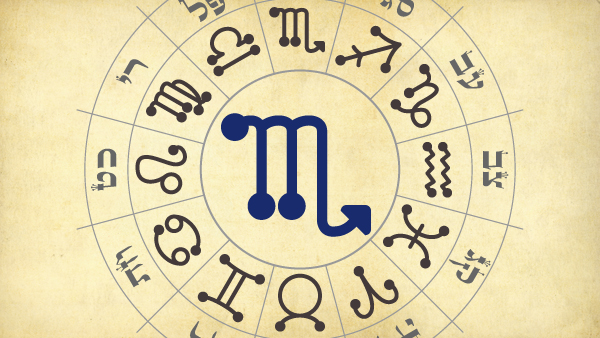 The astrological month of Scorpio, or as it is called in Hebrew, Mar-Cheshvan, is the Left column water sign, and is ruled by the planet Mars (Ma'adim) and the celestial body Pluto.

The Book of Formation speaks of seven planets in the solar system of which the planet Mars was identified as Scorpio’s ruling planet. In more recent times, additional planets and astrological bodies have been discovered, and as a result, have been found to bear influence on the signs. Scorpio, therefore, has two ruling planets: Mars as stated in The Book of Formation and Pluto (discovered in 1930).  Kabbalistic astrology, however, focuses on the seven traditional planets.

All water signs are emotional, but Scorpios are particularly irrational when it comes to their emotions. They go to extremes, in both positive and negative respects. There is only black and white in the world of the Scorpio; no gray areas. If you are not their friend, then you are by default their enemy, and you will most definitely be treated that way.

As the Left Column of the water signs, Scorpios have a tremendous desire for power and control, and seek these at any cost. They do not waver, they do not falter, and they stay their course with total determination and strength, which can sometimes result in unnecessary force and violence. Mars, which rules the month of Scorpio, is the planet (and not coincidentally the Greek god of war), which makes Scorpios warriors who have the drive to eliminate their enemy no matter what.

Pluto rules life and death, as well as the power and energy of the seed, which manifests as new life. Scorpio’s deep sexual desires are rooted in the compulsion to propagate the human race.

Scorpio is a fixed sign, which means that they do not like change and want total control over their lives and the lives of those around them. Their greatest fear is to lose control.

In the Scorpio world of extremes, love is everything. If they feel their love is not reciprocated, this love can turn into hate. It is very difficult for Scorpios to forgive and forget. The typical Scorpio will not rest until he has his revenge. This is the hardest Tikun (correction) of Scorpios - to control the urge to avenge, and instead to live, love and let go.

Mar-Cheshvan, in Hebrew means "bitter Cheshvan". However, it can be transformed into Ram Cheshvan, which means "elevated Cheshvan". Our job throughout the month, therefore, is to transform that which is bitter into sweet, that which is lowly into lofty. It takes a strong consciousness and self-control to achieve this transformation. It is not easy to make the dark forces completely white.

Scorpios are very good businesspeople. They like money because it gives them control and power. They are very good politicians, doctors, physiologists, astrologers, and financiers. They have a powerful intuition, along with strong mystical and spiritual powers. If a Scorpio chooses a life of crime, they can end up being the most lethal and ruthless members of their crime family.

The Great Flood took place in the month of Scorpio. Noah's generation was corrupt and God saw no other way but to destroy it completely with the flood. Only Noah, his family, and a pair of all of Earth's creatures remained alive because of the protection provided by the Ark.

Scorpio tends to be a month of negative energy and one of the only months lacking in holidays. Scorpio is a good time to focus on negative patterns, the ill feelings we harbor, and the grudges that we may bear.

If we overcome the natural tendency toward revenge, toward taking the law in our hands, toward giving people what they "deserve," and focus on revealing more Light in the world, we can thrive in this month. As Rav Berg says, “the war against the darkness is not fought with guns and artillery, but by lighting as many candles as possible.” The more Light we bring to the world, the more darkness we eradicate, for darkness cannot exist where there is Light.

Guide to the Month of Scorpio

Assets of a Scorpio:

Scorpios are very emotional and take things too seriously.
Learn to fear less and love more. That is the secret of letting go.

They are renowned for their jealously and sharp tongue.
What is the punishment for jealousy? Jealousy itself!

One thing that most people don’t know about Scorpios is that they are plagued with fears.
Instead of using mind games to mask the fear, be honest with yourself. Face your fears so you can get rid of them.

Scorpios have a talent for organization and are completely reliable. Unfortunately, there is a hook: they want to control you.
Controlling people is an exercise in futility. The only person you can truly control is yourself.

How to Improve Your Relationship with a Scorpio:

How a Scorpio will find fulfillment: