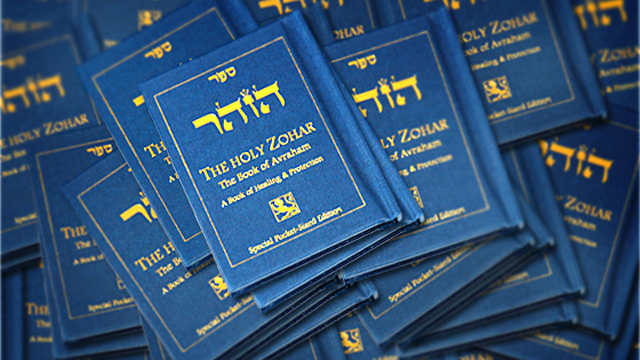 Every week, Kabbalah students all around the world study a different portion of the Torah and the Zohar, connecting to the special scroll-reading of that portion on Shabbat, the 7th day of the week. Each portion in the Torah scroll is hand-written, with specially sized letters, dots and spaces appearing occasionally. The Zohar explains the secrets of the Torah and reveals the spiritual essence of the stories within. There is no greater emphasis placed on any portion than there is on Pinchas.

Pinchas is widely known as the portion that supports healing and protection (this is the portion which is printed on our mini-Zohars, the Pinchassim). An entire volume-plus of the Zohar is dedicated to this week’s portion, in which there is an all-inclusive discussion about the anatomy of the human body.

Why does the full benefit and impact of healing appear this week?

Today, there is an urgent need for solutions to many diseases that spread throughout the world, despite constant research and ongoing advancements in technology. It’s not a coincidence that the portion of Pinchas will always fall in the month of Cancer – a disease which is one of the leading causes of death in the world.

The Zohar and the Torah provide us with many secrets for healing. For starters, Rav Berg taught us that even scanning the Zohar portion of Pinchas (without any knowledge of Hebrew or Aramaic) on a daily basis will reveal a great, healing Light for anyone in need of physical or mental remedy. Knowing is connection, and thanks to Rav Berg, we have the ability to understand some of these secrets.

At the very beginning of the Torah portion, we have in the name of ‘Pinchas’ a small letter Yud. The letter Yud is the smallest letter of this universal, Hebrew and Aramaic alphabet. We have learned that every time a letter appears in smaller form, it represents more of the infusion of Light – with less physicality. What is more is less; conversely, that which is less of a physical nature provides us with a greater spiritual reward.

Yud is also the first letter of the most powerful code name for the Creator: the Tetragrammaton. The first letter is the root of everything that benefits mankind.

In Pinchas we have a reduced version of Yud, so on this Shabbat we can expect a greater impact of the Light Force of the Creator because of the reduction of the letter’s physicality. Obstacles and hardships – all that of which the physical represents – are being reduced.

Another important distinction: In the Hebrew word shalom (peace), there is a letter – Vav (one of the 4 letters that make up the name of the Creator) – that is cracked right down the middle. The law of the scroll states that if there is even one letter throughout the thousands of letters in the scroll that has a hair line crack, it invalidates the entire scroll! There can be no letter with empty space between its formations. Yet in Pinchas, in order to validate the scroll it is required that this letter Vav in the word shalom must contain a crack! Why? Why would this opportunity be constructed in a way that violates the sacred rules of validating a scroll? What is so special about this reading of Pinchas? What makes this shalom aspect so special?

The answer is that if our true intent is to create peace and harmony – with the entire universe, with the people in our life, our friends and enemies – then, in our mind we can take something broken and mend it. The crack in the letter Vav symbolizes the opportunity to heal that which is fragmented or damaged. If we have a very positive consciousness and outlook on our particular behavior towards our fellow man, we can fix the crack in the letter Vav, so to speak.

On this Shabbat we have the ability to mend, correct and restore our environment. The quantum effect of shalom, peace, is included within this section of Pinchas.

Another aspect of the Pinchas portion: the word Magefa, which means ‘plague’. Cancer and other illnesses can be viewed as modern day plagues. The plagues of the past destroyed the lives of hundreds of thousands of people. Every year, Cancer takes the lives of millions of people. In the middle of this verse there is a space. Spaces in the Torah scroll usually occur after the completion of a whole verse. But there is a space in the middle of this verse, connecting us with the word Magefa, plague. When we consider the importance of the relationship between letters and parchment – which one is carrying a greater impact of the Light Force of the Creator? The answer is: the parchment. This is because the letters already create a limitation, where the empty spaces of the parchment indicate from where the Light emerges. Therefore, to remove a plague of any sort, this space is required to indicate to us that we have an opportunity to remove plagues for the entire universe with the Light Force of the Creator by meditating upon that empty space.

In addition, what we have in this portion (unlike any other section within the Torah) are the readings that take place on all the High Holidays – those days that embrace all of the Light made available. All of those events, and all the infusion of Light that is required to eliminate negativity, are revealed in this Shabbat.

Remember: The Zohar can provide us with a wealth of information and connection to improve the well-being of all of humanity.