The Donkey and the Angel

The Donkey and the Angel 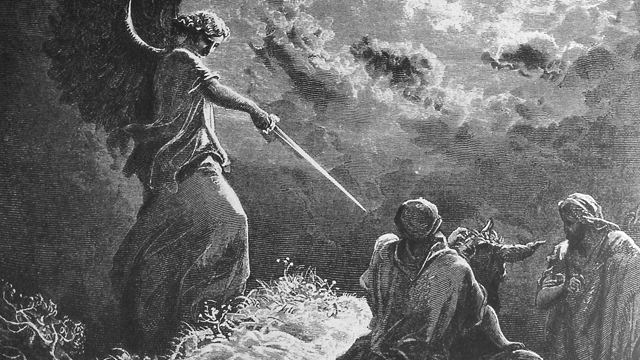 Michael Berg shared with us the following amazing lesson:

This week’s portion tells of Balak, the King of Moab, who hired Bilaam to curse the Children of Israel. Bilaam was well known to have great powers in his mouth. Balak told him, "For I know that whomever you bless is blessed and whomever you curse is accursed."

Against God’s desire, Bilaam agreed to assist Balak by cursing the Children of Israel, "And God was angry that he (Bilaam) was going..." What follows is one of the most unique and slightly humorous sections in the Torah:

And an angel of God stood on the road to stop him. He (Bilaam) was riding on his donkey accompanied by his two young boys. The donkey saw the angel standing on the road with his sword drawn in his hand, so the donkey veered off the road and went into the field. Bilaam hit the donkey, to turn it back to the road. The angel stood in the path of the vineyards, and there was a fence on both sides of the path. The donkey saw the angel and pressed into the wall, thereby pressing Bilaam’s leg into the wall. Bilaam continued to hit the donkey. The angel went further and stood in a narrow place, where there was no room to turn right or left. The donkey saw the angel and knelt down. Bilaam became enraged and hit the donkey with his rod. God opened the mouth of the donkey and it said to Bilaam, "What have I done to you that you have hit me three times?" Bilaam said to the donkey, “Because you have distressed me, if I had a sword I would have killed you now.”

The donkey said to Bilaam, "Am I not your donkey which you have ridden all your life, have I ever before done anything like this to you?" He answered: "No."

Then God uncovered Bilaam’s eyes and he saw the angel standing on the road with his drawn sword. Bilaam then knelt and bowed down three times. The angel said to him, "Why did you hit your donkey three times? For I have come to stop you. The donkey saw me and therefore veered off the road from before me three times. If not for the donkey veering of the road I would have killed you and let it live." Bilaam said to the angel: "I have sinned, for I did not know that you were standing before me on the road, and now if it is bad in your eyes (that I am going) I will return.” The angel of Hashem said to Bilaam, "Go with the people but speak only what I tell you to speak." Bilaam then went with the ministers of Balak.

There are many lessons to be learned from this very unique section of the Torah. Mainly, we should understand that there are often times we find obstacles standing in our way, not allowing us to do what ‘we’ think should be done. Then we become upset at the obstacle (whether it be a person or a situation), not realizing that it might actually be a gift from the Light who sent an angel to hinder our plans and change them for the better. We do not see everything with our eyes; therefore, before becoming upset at the ‘donkey’, we should recognize that maybe there is an ‘angel’ behind our obstacles.